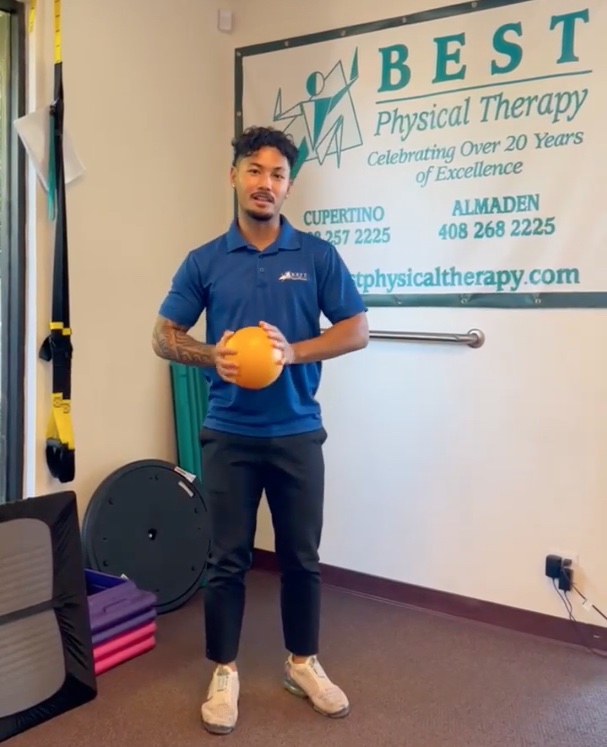 Hippocrates introduced the idea of manual manipulation for pain relief.

A week became a month

Physical Therapy provides you the opportunity to practice self-awareness. Physical Therapy assists in correcting your posture, reducing your aches and pains, and can help you recover more quickly from injury or surgery.

We asked our PTs to share their favorite exercises. Here are their responses!

The information below is for educational purposes only. They are not a substitute for physical therapy or medical care. Before you try these or any other exercise, please consult your physical therapist or physician.

Scapula Rows & Retractions with a Squat

Scapular Retractions with a Resistance Band

Disclaimer: The information in these videos or photos is intended for informational and educational purposes only and in no way should be taken as the provision or practice of physical therapy, medical or professional healthcare advice or services. The information should not be considered complete or exhaustive and should not be used for diagnostic or treatment purposes without consulting your physical therapist physician or other healthcare provider. The owners of this website accept no responsibility for the misuse of information contained within this website.

To read more about our therapists, check out 2021’s posting:
“Getting to know your physical therapist”

To read more about our therapists, check out 2020’s posting:
“Why I Became a Physical Therapist”

What our Patients are Saying…

I like that BEST has two locations and has always been able to accommodate my schedule.

My Physical Therapist was Amazing

So a year later I’m feeling great and still doing all the exercises I was taught to stay in shape! Read more “Still Feeling Great”

Help Your Quality of Life

I love my physical therapist.  She makes me feel so good after I’ve just beat myself up at the gym.  Read more “AWESOME!”

I Have Made Tremendous Improvement

Kinjal is an excellent physical therapist. I made tremendous improvement under her care and guidance. Always educating her patient, smiling Read more “I Have Made Tremendous Improvement”

I’ve noticed significant progress in my rehabilitation. I would without a doubt recommend BEST PT to family, friends and a Read more “Significant Progress”

Phenomenal! About a year ago I had a work related injury and was referred to Best Physical Therapy by my Read more “Phenomenal!”

I Love the BEST Approach

This is my 3rd experience with physical therapy. I never completed my treatment with the first two because I was Read more “I Love the BEST Approach”

I Always Look Forward to My Sessions

Although getting released from physical therapy is a great thing, it can be bittersweet. I always looked forward to my Read more “I Always Look Forward to My Sessions”

I Have Recommended BEST Physical Therapy

Staff are Skilled, Knowledgeable and Friendly

Every single staff person is on point. From day one when I called to schedule my first appointment and throughout Read more “Staff are Skilled, Knowledgeable and Friendly”

This Place is Amazing!

The Folks at BEST Physical Therapy Can Help!

A God Send! Best Physical Therapy, Cupertino, has been a God send for our son! They have given him the Read more “A God Send!”